Two new crossovers have been installed on the Gardiners Creek Trail at Pakenham St to link the Blackburn Creeklands pedestrian paths in Kalang Park with Blacks Walk. One crossover for the northern path, and one for the southern path. 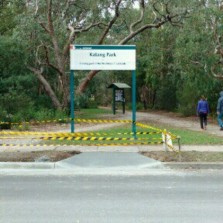 The photo shows one of the crossovers directing people straight into the Kalang Park sign, or else requiring people to make an acute turn left or right onto the footpath, and then another acute turn onto the gravel path. Crossover placement should be carefully decided to avoid such problems. The “standard” design Council uses, which narrows towards the footpath, should be replaced with a design that splays out widely at the footpath.

Rather than have two crossovers either side of the speed hump in Pakenham St, a better option would have been to have one wide crossover incorporated into the speed hump as recently installed by Council at the entrance to Elgar Park off Elgar Rd – one of the best crossovers you’ll find in Melbourne.  Well done Whitehorse! It’s similar to this crossing in Glenhuntly on the Ross Town Trail shared path. Makes you wonder how this idea wasn’t used at Pakenham St. This type of crossing is commonly called a Wombat Crossing because of the effect it has of slowing vehicle speeds. 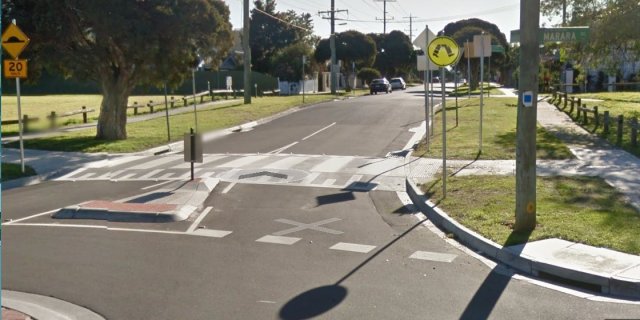 WATAG recommends that Council communicates with the wider “active community” before other crossovers similar to Pakenham St are installed.

Whitehorse Council recently located a mobile sign in Frank Sedgman Park to remind all park and path users to “Please respectfully share our paths”. We captured it on video so you can see it too. Just click the picture below.

How safe do you feel walking in Whitehorse?

During March and April, Whitehorse Council participated in the new WalkSpot  project to explore people’s perceptions of pedestrian safety across Metropolitan Melbourne.

Participation in this survey is now closed, but you can view the results and see what others entered by clicking here to Visit the WalkSpot site.

If you were not able to make an entry for WalkSpot and still have particular concerns, you might like to report them to Whitehorse Council. Send an email by clicking the link: customer.service@whitehorse.vic.gov.au

Another way is to use Snap Send Solve.  This is a free app that allows you to easily report feedback to relevant Authorities in Australia and New Zealand.

Click the link above for a description of how it works, and to download the phone App so you can report things when you see them.

Bicycle Network has commented on planned further development of this trail at the Ringwood end.  Click this link for details which will display in a new window. There is a further link within the article to a short VicRoads survey gathering feedback on the proposed development. Click here to go straight to the survey. The survey closes on May 24th.

Readers may like to contrast the efforts by VicRoads to accommodate both cyclists concerns and community needs in Ringwood with the situation in Blackburn, where VicRoads and the LXRA have together delivered a very poor result which does not meet cyclists needs and goes against community wishes.

LXRA were forced at the last moment to install lifts at Blackburn Station to accommodate the needs of less-abled persons. Unfortunately the lifts only assist people coming from the north side, because there are no lifts on the south side. Instead, a long ramp with a hairpin bend in the middle to give a return, has been constructed. Unfortunately the  hairpin bend presents a difficulty for mobility carts and is virtually impassable by those using a recumbent bike, a bike with a tag-along, or a tandem.

The tunnel under the station is still narrow and totally unsuitable for high pedestrian volumes when mixed with people using disability aids and mobility carts also accessing the station. This is compounded by those who may be simply wanting to travel from South Pde to Railway Rd and not access the station. Normal bikes will find it more difficult than in the past to go from one side to the other, and those using recumbents, tag-alongs or tandems will find the north side double hairpin bends even worse than the south side.

VicRoads have yet to announce their final plans to get from Middleborough Rd to Blackburn Station, and have yet to hold a community meeting promised in early 2016.

WATAG believes that Blackburn active transport users have been treated very poorly by LXRA and VicRoads, and recommends that you continue to advocate to them personally for your active transport needs to be met.

How fit are you and your neighbours?

The Australian Health Tracker, Australian Health Policy Collaboration is a report card on preventable chronic diseases, conditions and their risk factors with the objective being to track the progress for a healthier Australia by 2025.

Image used under license from Freestock.com

A recent article in The Age newspaper used the data derived from Australia’s Health Tracker to assess the proportion of adults within each Victorian postcode who exercise at or above the base level that is defined as doing the equivalent of more than three hours of walking for fitness each week.
Click The AGE for the article source.

The average for the Melbourne metropolitan area is that 64.2% of the adult population DON’T exercise at or above the base level for fitness.

And what about Whitehorse residents?

The following is a ‘league ladder’ from the best to the worst postcodes/suburbs in Whitehorse in relation to base levels of adult fitness:

An important outcome of this Whitehorse analysis would be the initiation and promotion of adult fitness programs (by the State government, Whitehorse Council, community groups and individuals) such that the overall fitness level for ALL Whitehorse residents is improved to approximate the best postcodes in Melbourne (i.e. more than 50% of residents at or above base fitness levels).