The major daily papers have recently featured reports about that Every cancer patient should be prescribed exercise as a medicine. For interesting comment on this refer to:

Exercise and mental well being:

The best kind of exercise is the kind you actually do, says one of the researchers from a recent study showing exercise can prevent depression.

An ABC report – 1st May 2018 – RN and Mariella Attard, informs us that a recent study shows that exercise can prevent depression. In the report, Dr Joseph Firth from the University of Western Sydney said:

“People who were sufficiently physically active were at 15 per cent reduced risk of developing depression,”  and

“We believe that physical activity and the chemical release actually provide a buffer from this and make you more resilient to developing depression,”

The Black Dog Institute says in this link, that:

“It is no secret that exercise can make you feel good. But did you know that just an hour of exercise a week has a protective effect against depression?”

They also say that research has indicated that even small amounts of exercise can boost serotonin and endorphin levels, aiding in the treatment and prevention of mental illnesses such as depression.

Perhaps the best news above is the photo caption “the best kind of exercise is the kind you actually do”  –  such as walking or cycling to get around for as many of your daily activities as possible. ie use Active Transport when you can!

Cycling and walking are missing out on transport $$$

“To understand why Australian cities are far from being meccas for walking and cycling..,  (referred to in our last newsletter) …follow the money. Our research has collated data for all the states and territories and our three biggest cities. We found that cycling and walking receive a tiny fraction of overall transport infrastructure funding. To improve cycling and walking infrastructure in our cities, funding will have to increase significantly….” –  The Conversation – 30th March 2018

Click here to read this excellent article in full.

Out of a total “transport” budget of  $8.75 Million, only $0.187 M is allocated for specific cycling projects – just 2.1%. WATAG is disappointed that there appears to be no provision to implement the Easy Ride routes which are a major feature of the Bicycle Strategy, and no provision for adding additional sections of the Pipetrack path which was commenced last year.

To review the Whitehorse Proposed 2018/2019 Budget – click here. Then…Have your say!
Written submissions can be made by Sunday 27th May. Refer to this link for details. 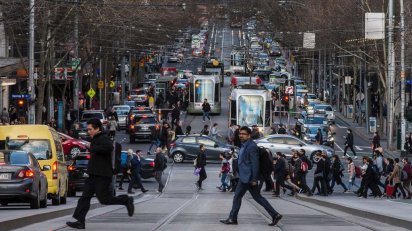 “Melbourne’s CBD could become largely ‘car-free’ under a proposal to counter a growing pedestrian crush, and planning experts and advocates say change needs to happen soon.

Melbourne City Council is flagging the idea of having ‘superblocks’, which would remove cars from the Hoddle Grid and Docklands and prioritise pedestrians…”       Click here for the full article.

Why is this relevant to Whitehorse?

Box Hill will soon have the second highest concentration of high-rise buildings in Victoria (apart from the Melbourne CBD) and will be larger than both Canberra and Hobart in terms of high density development. The population of the Box Hill central precinct is forecast to double within the next 4-5 years with the developments that have been approved as of end-2017.

WATAG believes that innovative planning, incorporating ideas such as car-free plazas is urgently needed by State and Local Government to allow for this large increase in population to live better..

“By being aware of human needs and weaving in the right qualities [with] urban design, people are more likely to perceive that healthy, needs-fulfilling experiences are not just possible but preferable.”

Read this article (The Conversation, 27th April 2018 by Jenny Donovan) for some ideas about how “Good design can improve the choices we make.”

There are eight other Metropolitan Activity Centres being developed in the Melbourne Metropolitan Area (Broadmeadows, Dandenong, Epping, Footscray, Fountain Gate-Narre Warren, Frankston, Ringwood and Sunshine) but none of them have anywhere near the level of high-density, high-rise building development that is now occurring in (or planned for) Box Hill.

And the facts are that most jobs aren’t in Melbourne CBD!

Understanding that most jobs are outside the Melbourne city centre is vital, because the challenges they present for transport infrastructure policy are more complex and more politically difficult

Irrespective of your views on whether Box Hill should be a Metropolitan Activity Centre…the facts are that is IS ONE!

Given that fact… WATAG urges all stakeholders to to plan innovatively and help make Box Hill a much better place to live and WORK. A strategic plan covering all aspects of the entire Box Hill MAC is urgently needed.

As noted above, WATAG strongly  advocates  the development of an overall plan for the entire Box Hill MAC, including a major rethink of the transport interchange needs for the future.

“Public transport that is safe, efficient and effective is a core priority when it comes to city-building. While trains get a lot of attention, buses can also deliver successful public transport services – if we can overcome some common problems.” The Conversation 2 May 2018 by Jason Byrne and Emma Pharo
Click here for the full article.

Getting around safely for all 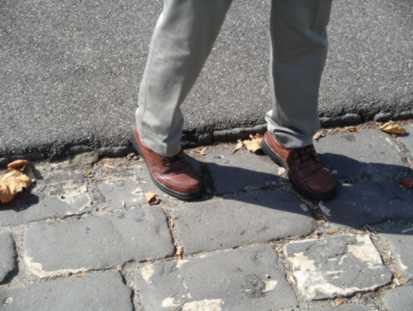 DDA (Disability Discrimination Act) compliance is now  not just de rigueur for authorities, but an essential part of design.

This was not always the case and many parts of Melbourne – including Whitehorse – were developed before standards were written to ensure DDA compliant infrastructure results.

Hence, there is a legacy of crossings which present difficult – even dangerous – situations for less-abled and wheelchair dependent people.

WATAG has written to Whitehorse Council asking if they have a plan for upgrading non- compliant DDA pram crossings similar to other Councils.

Scroll through the letter below, and make you own views known to Council, and report any unsafe crossings to them. Using Snap-Send-Solve (see below) makes it easy to report.

Should cyclists and walkers be separated?

Conflict between cyclists and walkers on shared trails is a growing problem. The default should be separation, as recommended by Infrastructure Victoria.

The North East Link Project will linking the M80 Ring Road from its current end, north of Greensborough, to the Eastern Freeway will be an ongoing project to comment on for several years.

Refer to last newsletter for WATAG’s strong views that adequate resources must be allocated to provide the same world-class result for walkers and cyclists as will be provided for motor vehicles. It is the view of most who are informed about the matter (see previous article), that since walkers and cyclists have different needs,  they need separate paths where this is possible to arrange. With a greenfield development such as the NEL, WATAG believes that this should be the norm.

WATAG is very concerned about the impact on Whitehorse of the Option A route because of projected additional traffic to and from Box Hill via Elgar Rd, Station St and Middleborough Rd. With the Box Hill population likely to substantially increase because of Box Hill MAC developments (see article above),  the Government, NELA and Whitehorse Council need to be planning how to accommodate this increase.

So far, we have not seen evidence of recognition from any authority that this will be an additional problem to be faced in the Box Hill MAC planning.

If you think this is an issue that needs to be addressed, please write to all the parties involved and tell them, and tell the world too via the letters to the paper.

As noted in last newsletter, WATAG has submitted an application for Community Group Membership of the Community Liaison Group (CLG) being established by NELA. (Click here to read the application.). Unfortunately NELA has chosen not to include WATAG on this CLG, but has invited us to join an Active Transport technical group.

“I’m a transport planner – a woman working in the built environment professions.”

“Part of a minority group. I’ve been trusted to plan investments in big infrastructure like light rail and metro rail systems: integrating rail infrastructure and land use planning in a way that engages communities and stakeholders.

But there is another important part of transport planning and urban design that doesn’t attract the same recognition in Australia: active transport.

I do something considered unusual – I ride a bike.” …

…”We should start to use female participation in active travel as an indicator of overall city health.”

Food for thought for our local planners.

We reported a year ago (Active Whitehorse News – June/July 2017) that sharrows were planned as part of Whitehorse Council’s  efforts to imporve cyclist safety at a number of existing traffic treatments such as roundabouts and traffic islands. 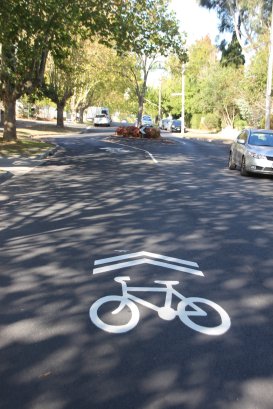 Albion Rd forms part of one of the recommended Easy Ride routes. Hopefully cyclists can look forward to the road spaces between the roundabouts also having sharrow markings. This will help motorists to be aware that the entire route is for bikes as well as cars, and that its not just the roundabouts where caution is needed.

The Council has also included sharrows in safety measure implemented along Dorking Rd and other areas in the city.

WATAG hopes that sharrows are a sign (pun intended!) that have at last become a more normal part of the Whitehorse Council’s repertoire of road markings to help cyclists move more safely around the city’s  streets. This is similar to the way they are freely used in inner city areas which, as a result, are so bike friendly.

Keep up the good work Whitehorse!

An essential App for your Apple or Android phone!
Snap Send Solve is the FREE app that allows you to easily report feedback to relevant authorities … whilst you are walking or riding around. Click here for more information and download the App so you can help local Councils (and other authorities) identify and remedy problems you see and report. Help your Council make your community safer.

Last newsletter commented on the long wait to finally get the public toilets (suitable for disabled people to use) operating at Blackburn Station, and noted that they are now operating.

But those that are not so nimble are still waiting for a resolution to the disability access difficulty between the north platform and the disability lift. The yellow step and locked gate are both a barrier. WATAG submitted a report to LXRA and PTV, and also to Whitehorse Council hoping they will try and use their influence to fix this.

Unfortunately, those with most to gain – the disabled – are again having to wait. This time just for an answer to the report WATAG submitted.

WATAG is registered as a charity with the Australian Charities and Not-for-profits Commission ABN 63 938 570 447.