Attend if you can, and share you thoughts with Council and others in the community. Visit the Council’s Active Transport page and follow the links for more information on ideas Council has developed for discussion … ideas that are aimed at making cycling easier and safer for the 60% of those who’d like the idea of riding, but are currently uncertain about how to find their way to local destinations easily and safely.

An initial six “Easy-ride” draft routes are suggested out of 21 possible routes over the next few years. Some of the suggested design principles can be seen by clicking here.

As noted in our last newsletter the North East Link Project will link the M80 Ring Road from its current end, north of Greensborough, to the Eastern Freeway.

All proposed options would impact on the Whitehorse area and its surrounds so WATAG Committee contacted NELA and met with NELA staff personally during November.

WATAG believes that since a new transport corridor is being provided, it must cater for all modes of transport, including Active Transport … not just motor traffic. Consequently WATAG did not nominate a route preference but instead preferred to make the following points strongly to NELA.

The Government announced at the end of November that Option A has been selected as the preferred route. This route goes south past Greensborough and under Banyule Flats and Bullen Rd via a tunnel to exit near the Eastern Freeway at Bulleen Rd. Refer to the route map at the NELA website for full details. This route will have a big impact on Whitehorse and is being opposed by Whitehorse City Council and many residents.

There is a very high likelihood that, irrespective of Council and community concern, Option A will be built. Consequently WATAG is maintaining its liaison with NELA to try and ensure that the objectives noted above are met. As part of this liaison, WATAG has submitted an application for Community Group Membership of the Community Liaison Group being established by NELA. Click here to read the application.

WATAG arranged a meeting with Walks Victoria and the Institute of Traffic Engineers Australia and New Zealand to discuss coordinating efforts to try and get the best outcome for ALL users of the North East Link, as noted above. Following that discussion the ITEANZ Executive Board issued a Position Statement advocating for consideration of active transport facilities as part of the project or, indeed, ahead of the project. Part of the statement says:

“The ITEANZ believes that walking and cycling facilities along the North East Link corridor and alongside the Eastern Freeway should be provided to a high standard to demonstrate how important sustainable active travel is to Melbourne’s future.”

The full statement can be read  by clicking here.

WATAG agrees with the statement and commends the ITEANZ Executive for its efforts to make sustainable Active Transport an important part of Victoria’s future.

An essential App for your Apple or Android phone!
Snap Send Solve is the FREE app that allows you to easily report feedback to relevant authorities … whilst you are walking or riding around. Click here for more information and download the App so you can help local Councils (and other authorities) identify and remedy problems you see and report. Help your Council make your community safer.

Sara’s Story: Getting around without a car (with kids!)

Sarah crashed her car, and now has epilepsy and cannot drive.

“If someone had told me a year ago that in 12 months we would be doing most of our daily traveling by electric bike, I would have laughed. I live in Portland (USA), and have a 3-year-old and a 5-year-old. It rains here for about 5 months out of the year. It gets cold. I’m not in good enough shape to drag two small children around on a bike…”
Read more about Sarah – click here. 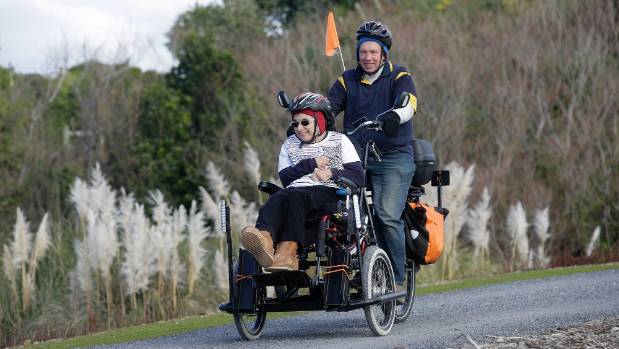 Hitting the pathway on their shared e-trike are Avis and John Darnley.

Click here to read a terrific story of how an active mind created a great Active Transport opportunity for Avis and John Darnley of New Zealand.

Regional trails – for Walking and Riding …

The Eastern Regional Trails Strategy will provide the strategic direction required to allow local government and other land management authorities to work together towards the shared goal of an interconnected and well-used trail network that is accessible for all and promotes healthy and active communities.
Read more here.

Just in case you are not already convinced that taking a walk is VERY BENEFICIAL, Victoria Walks has listed the ten top reasons for walking more. Click here to read them now. And while you are there, check out all excellent Active Transport advice at their terrific website.

Why WE need to do More…

Only in a few active travel strongholds, typically in the inner city, do Australian cycling and walking rates get close to those in Europe. Andrew Robinson/Flickr, CC BY-NC

Here are some excellent reasons why Whitehorse Council’s commitment to Active Transport is a must.

… and More about Box Hill

WATAG is committed to trying to assist all concerned to plan for the Box Hill of the future where Active Transport and top-grade access to public transport is the norm and not a major difficulty.  Anyone interested in this is encouraged to read “The Conversation” article “How virtual 3D modelling and simulation can help us create better cities”.  Click here to read the article.

Check out actions WATAG has already taken to try and assist in the planning process.

Then check the article below about how cost effective it is to cycle.

“There is a tradition in community organizing that has focused on pressuring reluctant officials to give politically powerless citizens what they want and deserve. Further, many observers of the current political scene suggest that we are witnessing a rise in “enraged” citizens rather than “engaged” citizens. Experience with town meetings hijacked by partisans seems to indicate that inviting participation is asking for confrontation and discord. As a consequence of these views, a significant amount of the writing about citizen engagement has focused on bringing changes to government from the outside but has not viewed government as a partner or initiator.”

There is ample evidence throughout the above report that these negative views need not prevail. The purpose of the paper is to identify ways that local governments can work with residents and local organizations to achieve a higher level of citizen engagement by strengthening connections—with the community, in the community, and across the various actions that local governments can take to involve citizens.

That’s what Active Transport is all about!

Myth-busting some of our worst urban planning misconceptions

Vancouver’s cycling traffic has spiked dramatically since the city embarked on a plan to greatly increase the city’s bicycle infrastructure.

A study in Copenhagen (where the full cost of transportation choices are routinely calculated) found that when you factor in costs like time, accidents, pollution and climate change, each kilometre cycled actually gains society 18 cents!

At last the public toilet outside Blackburn Station is open! It’s been a long six-month wait (with crossed legs)! The bureaucratic snarls that led to such a delay are unacceptable in this day and age when everyone agrees that providing facilities for the disabled in particular, are high priority.

And those that are not so nimble are still waiting for a resolution to the disability access difficulty between the north platform and the disability lift. The yellow step and locked gate are both a barrier. WATAG has submitted a report to LXRA and PTV, and also to Whitehorse Council hoping they will try and use their influence to fix this.

WATAG is registered as a charity with the Australian Charities and Not-for-profits Commission ABN 63 938 570 447.